In recent years numerous studies have advocated a role for
Helicobacter pylori in causing a variety of extragastric manifestations.
These situations include Hematologic disorders
such as iron-deficiency anemia and idiopathic thrombocytopenic
purpura, vascular disorders such as ischemic heart
disease, cerebral stroke, primary Raynaud phenomenon and
primary headache, autoimmune diseases such as Sjogrens
syndrome, Henoch-Schonlein purpura, autoimmune thyroiditis,
idiopathic arrythmias, Parkinsons disease, nonarterial
anterior optic ischemic neuropathy, cutaneous disorders,
such as rosacea, pediatric diseases such as growth retardation
and sudden infant death syndrome, renal failure, diabetes
mellitus, respiratory disorders, and glaucoma. However,
many of these reports suffer for being either case reports or
case series without suitable controls. More importantly many
of these reports include inadequate numbers of patients.
Therefore, it could be supported that purported manifestations
may represent a coincidental phenomenon. However,
there are some situations that could really represent a true
extragastric manifestation. These situations include sideropenic
anemia (refractory iron deficiency) and immune
thrombocytopenic purpura due to molecular mimicry. The
search in this field must be continued using large number of
patients and suitable controls. Confirmation of these results
could probably modify our therapeutic guidelines for some
disorders.
Key words: Helicobacter pylori, Extragastric manifestations,
Infections 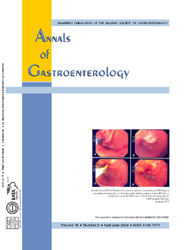