A 34 year-old male was admitted in our hospital because of
double vision, ptosis of the eyelid, miosis and enopthalmos
of the left eye together with impaired sweating of the upper
body quarter for the last two weeks. Ten years ago the patient
underwent total esophagectomy with colonic graft interposition
because of esophageal rupture during large caliber
bougienage for congenital esophageal stenosis. The
endoscopy showed a large diverticulum below the upper
esophageal sphincter and numerous ulcerations of the lower
part of the colonic graft in the area of the former gastroesophageal
junction. The patient was diagnosed with postganglionic
Claude Bernard-Horner syndrome due to stellate
ganglion compression from the colonic diverticulum.
The patient was discharged with recommendations for liquid
diet and body positions that could facilitate left stellate
ganglion decompression. In the case of persisting symptoms
the patient was advised about the possibility of a new
surgical intervention including diverticulectomy. To the best
of our knowledge this is the first reported case of Claude
Bernard- Horner syndrome as a long term complication of
colonic graft diverticle after esophagectomy for congenital
esophageal stenosis
Key words: Claude Bernard-Horner syndrome, colonic interposition,
colon grafting, esophagectomy, neuro-opthalmic
complications, esophagus 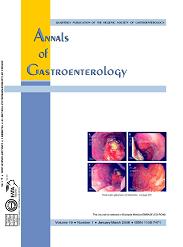