Objective: To evaluate the efficacy and compliance with
quadruple omeprazole as a second-line therapy for eradication
of H. pylori in duodenal ulcer patients.
Methodology: This is a prospective, randomized, singlecentre
trial. One hundred and fifteen consecutive patients
with active duodenal ulcer who had failed to eradicate H.
pylori infection on omeprazole (20 mg b.d.), amoxycillin (1
g b.d.), and clarithromycin (500 mg b.d.) (OAC10) for 10
days were randomized to receive as second-line therapy
omeprazole (20mg bd), colloidal bismuth subcitrate (120mg
qid), metronidazole (0.5g tid) and tetracycline hydrochloride
(0.5g qid) for 7 (OBMT7, n=54) or 14 days (OBMT14,
n=61). Failure of OAC10 had been confirmed by CLO-tests,
histology and immunohistochemistry on gastric biopsies
taken at endoscopy two months after therapy, and, in doubtful
cases by 13C-Urea-breath test (UBT). Compliance with
treatment and treatment-related side effects were assessed.
Eradication of H. pylori was confirmed by UBT 6 weeks after
therapy. Patients with a negative UBT were re-evaluated
at 6 and 12 months after treatment when a new UBT was
performed whereas those with dyspepsia or de novo reflux
symptoms were re-endoscoped.
Results: At baseline, there were no significant differences
in any patient- or disease-related parameters between treatment
groups. Six and four patients in the OBMT7 and
OBMT14 groups, respectively, were lost to follow up. Three
and seven patients in the OBMT7 and OBMT14 groups, respectively,
were non-compliant. By intention-to-treat (ITT)
analysis no significant differences were found in eradication
rates between OBMT7 and OBMT14 [66.7% (36/54) vs
80% (36/45), respectively, 95% CI -5% to 27%, p=0.215).
However, by per-protocol (PP) analysis eradication rates
with OBMT14 were significantly higher than with OBMT7
[96% (48/50) vs 78.7% (48/61), respectively, 95% CI 14.7%
to 17.3%, p=0.035]. Side effects were more common with
OBMT14.
Conclusions: OBMT7 appears to be equally effective to
OBMT14 as second-line therapy for H. pylori after failure of
OAC10 because a considerable number of patients cannot
tolerate OBMT14. However, if tolerated, OBMT14 is an excellent
second-line therapy for eradication of H. pylori.
Key words: omeprazole triple therapy, omeprazole quadruple
therapy, duodenal ulcer, Helicobacter pylori. 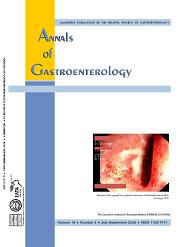