Neoplasms may originate from any of the endocrine cells
of the gastric wall, most commonly the enterochromaffinlike
(ECL) cells of the oxyntic mucosa. In recent years, the
increasing number of screening gastroscopies and biopsies,
and the widespread application of sophisticated immunohistochemical
stains for neuroendocrine markers, have resulted
in the frequent detection of ECL tumors. The latter
are regarded as a separate clinicopathological entity seen
in the setting of hypergastrinemic states, and their pathogenesis
follows the sequence hyperplasia dysplasia
neoplasia. According to the most recent WHO classification,
gastric neuroendocrine tumors (NETs) are generally
divided into well-differentiated NETs (class 1a), welldifferentiated
neuroendocrine carcinomas (NECs) (class
1b) and poorly differentiated NECs (class 2). Well-differentiated
tumors (NETs and NECs), for which the historic
term carcinoid is still in use, include three subgroups:
Type I (70-80%), associated with chronic atrophic
gastritis, which are benign (class 1a) ECL cell tumors in
the vast majority of cases; Type II (<10%), associated with
gastrinoma in patients with multiple endocrine neoplasia
type1 (MEN1), which are usually benign; and Type III or
sporadic (25-25%), which tend to behave aggressively (usually
class 1b). Resent advances in the diagnosis and management
of these tumors include the measurement of serum
chromogranin-A levels, which reflect tumor mass, the
use of synthetic somatostatin analogues for imaging and
therapeutic purposes, and the introduction of aggressive
multimodality protocols for the management of metastatic
disease. Little progress has been made in the treatment of
the rare, highly malignant, poorly differentiated neuroendocrine
carcinomas, which are rapidly fatal, showing only
short-lived responses to chemotherapy. Research is currently
focusing on the study of the molecular pathways of gastric
endocrine cell tumorigenesis, including the role of various
growth factors and gene regulation mechanisms.
Key words: neuroendocrine tumor, carcinoid, gastric tumor,
gastric polyp, atrophic gastritis, enterochromaffin-like cells,
gastrin, gastrinoma. 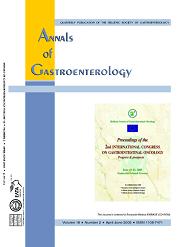