Epidemiological and clinical characteristics of HCV infection in transfusion-dependent thalassemia

Hepatitis C virus (HCV) is considered the principal etiologic
agent of post-transfusion hepatitis and is the main
cause of chronic liver disease in multi-transfused subjects.
Transfusion-associated HCV infection has become rare
since blood donor screening was initiated in 1990.
There is an impressively wide range of anti-HCV(+) prevalence
in thalassemics worldwide. This range varies from
2.7% to 97%. Studies in the early 90s report higher anti-
HCV rates compared to studies after 1993 when anti-HCV
screening was largely available in transfusion centres. However
large differences in anti-HCV(+) between centers in
the same country seem to need further explanation.
HCV genotype distribution also varies significantly between
countries and between thalassemia centres within the same
country. In studies from Asian countries, it seems that HCV
infection genotypes 3 and 6 predominate. In studies from
Europe there is a genotype 1 predominance, while in Greece
it seems that genotype 3 predominates.
Patients with â-thalassemia in Northwest Greece have an
HCV seroprevalence of 22.7% which is the lowest described
in Greece, while serum HCV-RNA was not detectable in the
majority (74%) of HCV(+) patients. No HCV(+) patient
was co-infected with HIV, HBV, HSV1, HSV2 and CMV.
HCV-RNA was detectable in 4 (26%) patients and
transaminasemia was frequent (73%).
Alpha-interferon (a-IFN) is the first-line treatment for
thalassemic patients diagnosed with HCV infection. There
is, therefore, particular clinical importance to determine
the incidence of HCV infection in thalassemic patients in
order to facilitate monitoring and treatment policy.
Key words: HCV infection, thalassemia, prevalence, HCVRNA,
anti-HCV(+). 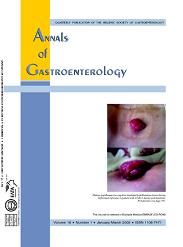