It was decided to create a transjugular intrahepatic portosystemic shunt (TIPS) to manage the recurrent upper variceal bleedings. However, since access to the right hepatic vein was impossible because of chronic proximal vein occlusion (Fig. 1), the patent’s left hepatic vein was cannulated. Puncture from the left hepatic vein into the left portal vein was successful (Fig. 2A) and, after tract balloon dilatation, an expanded tetrafluoroethylene-covered stent (Viatorr, W.L. Gore and Associates, Flagstaff, AZ, USA) was inserted and post-dilated up to 8 mm diameter (Fig. 2B). Post-interventional follow up showed no variceal bleeding episodes; however, the patient died 1 year later, following bradyarrhythmia and TIPS-induced hepatic encephalopathy. 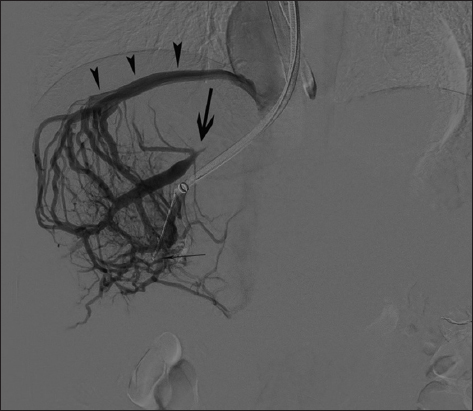 Figure 2 (A) Insertion of the expanded tetrafluoroethylene-covered stent-graft (arrowheads) into the left portal vein through the left hepatic vein (arrow). (B) Completion of direct portography shows preferential flow through the fully patent transjugular intrahepatic portosystemic shunt, placed from the left portal vein up to the confluence of the inferior vena cava and the left hepatic vein

Conventional TIPS procedures are performed by creating an intraparenchymal tract from the right hepatic vein into the right portal vein. They are associated with a very high success rate [1] related to the relatively large caliber and relatively close anatomical location of the 2 veins. However, in patients with a postoperative anatomy, including right hepatectomy [2] or left liver transplant recipients [3], creation of a TIPS can only be performed via the left hepatic vein. The presented case includes another pathological condition, namely chronic occlusion of the proximal right hepatic vein,