A 36-year-old female presented with a 6-month history of painful mouth ulcers and odynophagia that progressed to dysphagia. This led to a decrease in her nutritional intake and significant weight loss. She underwent an esophago-gastroduodenoscopy and ileocolonoscopy; the latter was normal. Above and separate from the gastroesophageal junction there was a patch of mucosa that had a slightly pinker color than the rest of the esophageal mucosa. This was better seen with narrow-band imaging (Fig. 1). 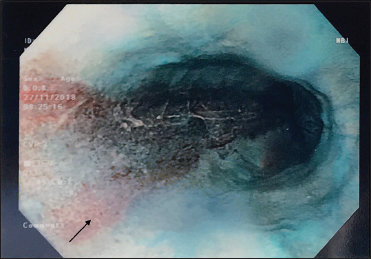 Histologically, the biopsies taken from the oral mucosa showed keratinocytes with ground glass nuclei, multinucleation and acantholysis, in keeping with herpes simplex infection (Fig. 2A). Biopsies of the surface epithelium away from the ulcer exhibited acantholysis with loss of the suprabasal layers in places (Fig. 2B). Direct immunofluorescence revealed intercellular deposition of immunoglobulin G and complement C3 throughout the prickle cell layer of the surface epithelium. These features were in keeping with pemphigus vulgaris (PV). 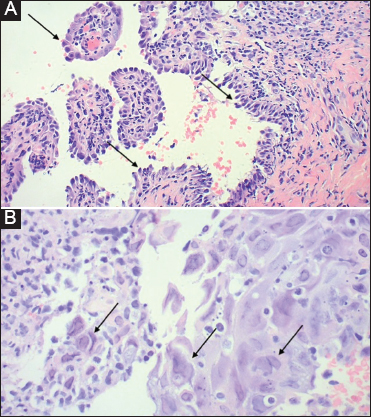 Figure 2 (A) High power photomicrograph showing ulcer slough and overlying keratinocytes with ground glass nuclei, occasional multinucleation and acantholysis, in keeping with herpes simplex infection. (B) Low power view of oral mucosa covered by basal keratinocytes with acantholysis, giving them a “tombstone” appearance. The suprabasal layers have been largely lost

A mouth swab confirmed herpes simplex virus (HSV) I by PCR. Serology for antibodies to prickle cell desmosomes was positive (>1:100+++), consistent with PV. Thus, a diagnosis of PV with superimposed HSV infection was made.

PV is an autoimmune condition involving the mucosa and skin caused by antibodies against adhesion molecules on the cell surface of keratinocytes [1]. Involvement of the esophagus is uncommon and when reported generally presents with odynophagia and dysphagia [2]. Currently there is no evidence suggesting that HSV triggers PV [1]. HSV and PV have only been reported in patients with pemphigus on prior immunosuppressive treatment [3].