Autoimmune hepatitis (AIH) is a progressive, chronic liver disease characterized by unresolving hepatocellular inflammation of autoimmune origin. The clinical spectrum may vary from asymptomatic presentation, to non-specific symptoms such as fatigue, arthralgias, nausea and abdominal pain, to acute severe liver disease. AIH is characterized by the presence of interface hepatitis and portal plasma cell infiltration on histological examination, hypergammaglobulinemia, and positive autoantibodies. AIH is associated with other autoimmune diseases and its course is often accompanied by various non-specific hematological disorders. However, the coexistence of autoimmune neutropenia (AIN) is infrequent. We present a case of a female patient diagnosed with type 1 AIH and agranulocytosis on presentation. A diagnosis of AIN was established, based on the patient’s sex, the underlying liver disease, the absence of alternative causes, the presence of atypical anti-neutrophil cytoplasmic antibodies in patient’s serum and the favorable and dose-dependent treatment of both pathologic entities with corticosteroids and mycophenolate mofetil.

Autoimmune hepatitis (AIH) is a chronic relapsing liver disease characterized by hepatocellular inflammation caused by a combination of genetic failure of immune tolerance and environmental triggers. AIH is associated with the presence of interface hepatitis and portal plasma cell infiltration on histological examination, hypergammaglobulinemia and positive autoantibodies. A strong association of AIH with other autoimmune diseases has been reported. Concomitant hematological disorders, such as autoimmune hemolytic anemia, autoimmune thrombocytopenia and moderate leucopenia, are well documented. Nevertheless, the coexistence of severe neutropenia is very rare [5-7]. We present a patient with severe isolated agranulocytosis at the time of AIH diagnosis, with antineutrophil autoantibodies detected in the blood.

A 59-year-old female presented with non-specific right upper quadrant abdominal pain and intermittent fever with axillary temperature up to 37.9°C for a week, accompanied by mild arthralgias and general fatigue. She did not mention any history of prescription, herbal or over-the-counter medication, or consumption of alcohol or illicit drugs. Her medical history included a laparoscopic cholecystectomy 7 years previously because of acute calculous cholecystitis. She had no previous history of tattoos, no noteworthy allergies and no family history of liver, autoimmune or hematological disease. The results of the physical examination were unremarkable, except for mild icteric sclera and mild tenderness upon palpation of right upper quadrant of the abdomen without muscle tension.

Since the patient refused any invasive diagnostic techniques, neither a liver biopsy nor a bone marrow biopsy was performed. No further investigation to evaluate the patient’s neutropenia, including flow cytometry with peripheral blood, was pursued. Using both the revised original scoring system of the International Autoimmune Hepatitis Group (IAHG) [4] and the simplified criteria for the diagnosis of AIH [5] we ended with scores (10 for the former system and 6 for the simplified score) indicative of probable AIH. A diagnosis of type 1 AIH (AIH-1) and concomitant autoimmune neutropenia (AIN) was established [6-8].

Having presented with a severe neutropenia, the patient showed no improvement, with the lowest value (ANC 102/L) recorded during her 10th day of hospitalization. She was started on prednisone (60 mg/day) and a daily dose of granulocyte-colony stimulating factor for two successive days until neutrophils were properly raised. A progressive normalization of serum transaminases and a gradual stabilization of neutrophil count were noted (Fig. 1A, B). 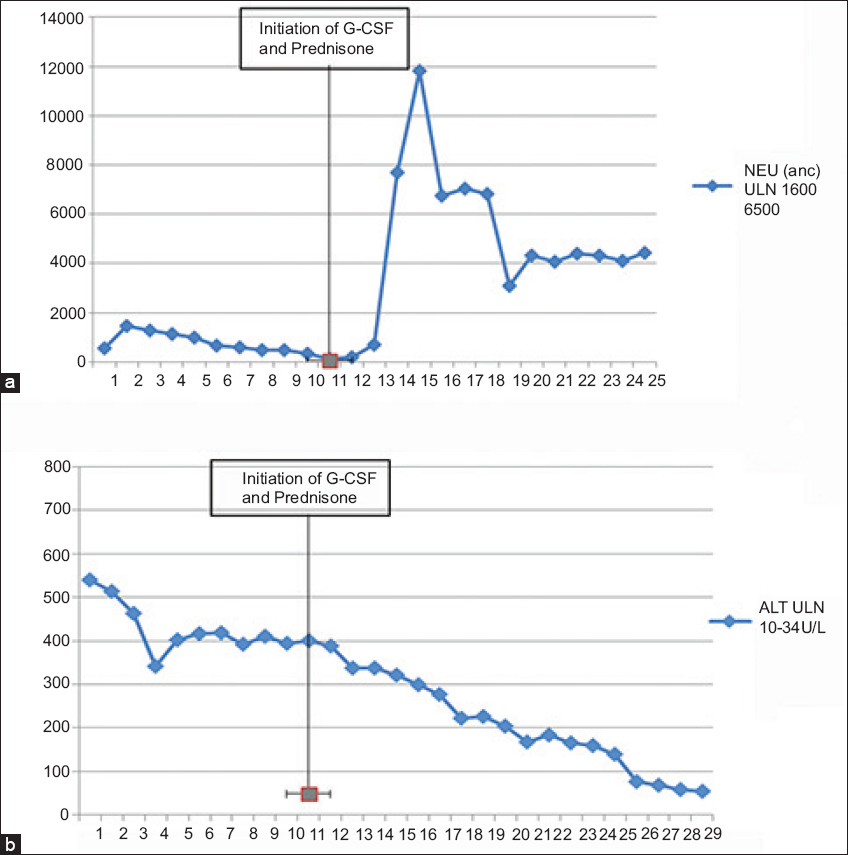 Upon discharge, she was on a regimen of oral prednisone (50 mg/day) and mycophenolate mofetil (MMF) (initial dose 1500 mg/day). Because of the patient’s neutropenia, with the possibility of azathioprine-induced pancytopenia, MMF was chosen over azathioprine. During follow up, tapering of prednisone was initiated. The patient is currently on her eighth month of follow up and has exhibited a normal neutrophil count and transaminases for three months. She is under a regimen of 10 mg prednisone and 2 g MMF without side effects.

AIN is classified as primary (no underlying pathology) and secondary [8]. In primary AIN, autoantibodies act against neutrophils that express human neutrophil antigens (HNAs) [8]. Secondary AIN occurs within the context of systemic diseases. It is usually associated with autoimmune diseases, infections or malignancies (Table 1). In secondary AIN, the correlation between neutropenia and the presence of HNAs is less well established and the target of the autoantibodies remains unknown [8]. These cases often present with other accompanying cytopenias [8]. 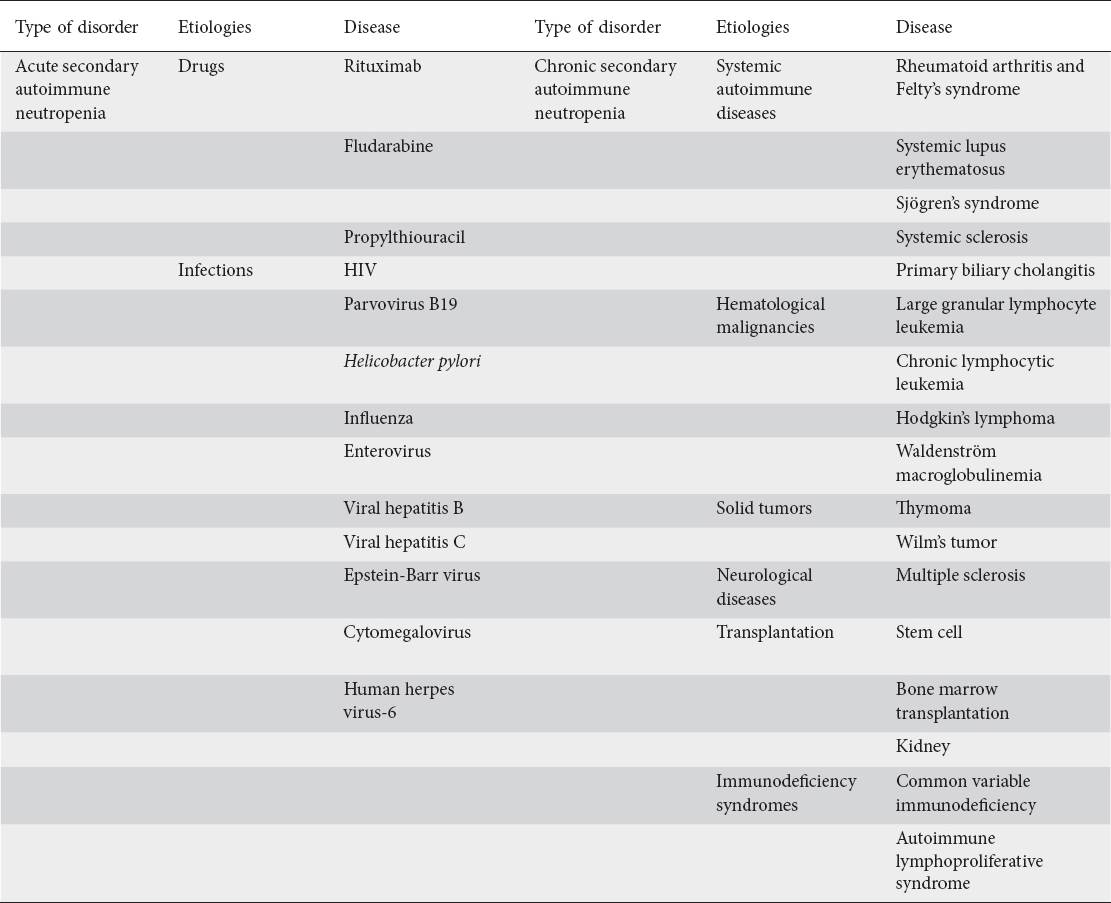 Many cases of AIH, specifically those with AIH-1, present with atypical pANCA [7,9]. ANCA are antibodies against proteins of cytoplasmic granules or other constituents of neutrophil cytoplasm. Regarding their staining patterns, they have been described as c-ANCA when they label the whole neutrophilic cytoplasm and p-ANCA when they only label the perinuclear cytoplasm [9]. Despite efforts, a predominant target for ANCA in AIH has yet to be identified. These autoantibodies are usually described as “atypical pANCA” [10] and may target an antigen in the nuclear periphery of neutrophils. Therefore, the term “perinuclear antineutrophil nuclear antibodies” (pANNA) might be more suitable [10]. The detection of high titers of ANCA (prevalence rate 40-96%) [9] solidifies the diagnosis of AIH-1, although their role remains obscure [7].

AIN associated with autoimmune liver diseases at the time of diagnosis is very rare. We located only three cases of AIN in the context of AIH [1-3] with positive atypical pANCA. Our case represents a female patient with a flare of AIH-1 on a backdrop of possible chronic unresolved liver inflammation, complicated by severe AIN. In concordance with the existing literature, she was also positive for atypical pANCA [1-3]. The autoimmune origin of her secondary agranulocytosis can be advocated by the absence of alternative causes, the association with the AIH flare and the sustained response to treatment with corticosteroids and MMF [3,9]. It is not yet clear whether the detection of atypical pANCA plays an active pathogenic role in the development of AIN, or whether their presence is a signifier of autoimmune activity [3,7,9].

In conclusion, in our case of severe AIN at presentation of AIH-1, the presence of atypical pANCA implied a strong association with an autoimmune cause of secondary agranulocytosis. Therapy focused on treating the underlying disease could lead to resolution of both pathological processes. AIH-related agranulocytosis remains a very rare occurrence [1-3], though AIH should be considered as a probable cause of AIN.