Primary aldosteronism (PA) represents an important cause of secondary hypertension. This situation is currently increasingly being diagnosed accounting for more than 10% of patients with secondary hypertension [1]. It is characterized by a variety of clinical features including cardiovascular, renal, and metabolic consequences, especially hypokalemia [2].

So far, there is only one report referring to two cases of PA appearing during the course of Crohn’s disease [4]. A coexistence of PA with UC has not yet been described.

The case described herein refers to a male patient, aged 49, who suffered from UC since the age of 33. The left-sided UC ran with remissions and exacerbations of mild to moderate severity once every 2 or 3 years. During the flare-ups he received short (4 to 8 weeks) courses of prednisone (30 mg/d orally in reduced doses) plus mesalamine (3.2 g/d orally; and 4 g/d in the form of enemas). Current maintenance treatment consisted of oral mesalamine 1.6 g/d and azathioprine 2 mg/kg/d.

During the last two years, he noticed a mild elevation in blood pressure, managed with oral diuretics and β-blockers (combination of atenolol and chlortalidone 50 and 12.5 mg, respectively). In September 2011, he complained of fatigue, myalgias, and mild epigastric pain. Hypokalemia was noticed, erroneously attributed to the use of diuretics. Despite the oral administration of potassium, hypokalemia persisted. 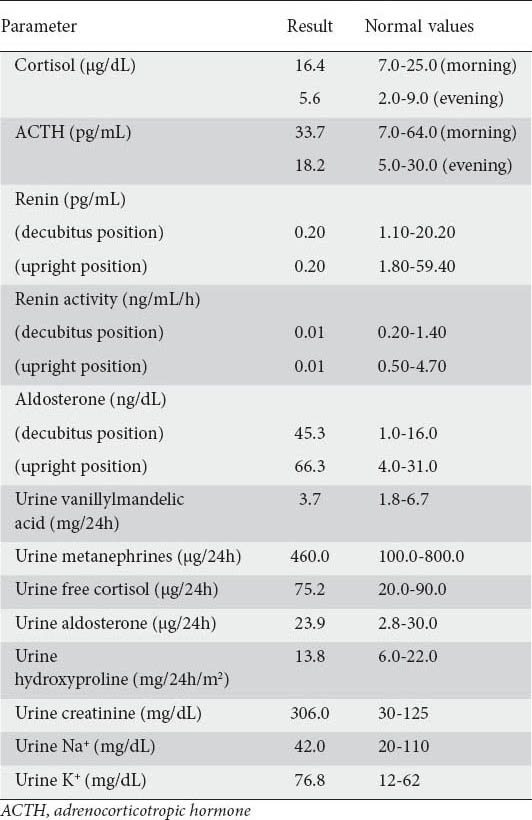 Based on the results of hormonal evaluation, the patient was started on eplerenone (Inspra 25 mg per day), which contains a blocker of aldosterone, binding at the mineralocorticoid receptor. The clinical results were quite favorable. Both blood pressure and serum potassium values returned to normal. He was asymptomatic on discharge, and remains so six months later, being under close clinical and laboratory surveillance. Bowel disease remains quiescent.

PA is now thought to be the commonest potentially curable and specifically treatable form of hypertension. The detection of this situation is of utmost importance because it allows a targeted treatment of hypertension to be applied, resulting in the prevention from aldosterone-induced tissue damage. Some pathophysiological events concerning the relationship between corticosteroids and adrenomedullary hormones must be stressed. Thus, glucocorticoids and adrenomedullary hormones may be influenced and may contribute to hypertension in PA. Moreover, cortisol and adrenomedullary hormones are different between PA subtypes and they might involve regulation of blood pressure [5]. It is of interest that aldosterone induces inflammation and oxidative stress that could be attenuated by mineralocorticoid receptor blockers (spironolactone) [6]. Further studies concerning the role of these hormones could be of value in patients with UC.

In our case, the appearance of PA during the course of UC is probably coincidental. However, we suggest that clinicians should bear in mind the possibility of the concurrent existence of the two situations when managing a patient with UC and hypertension, especially if hypokalemia is present.