Methods Extensive English language medical literature searches for human studies were performed up to the end of May 2013, using suitable keywords. Pooled estimates [odds ratio (OR) with 95% confidence intervals (CI)] were obtained using the random-effects model. Heterogeneity between studies was evaluated with the Cochran Q test whereas the likelihood of publication bias was assessed by constructing funnel plots. Their symmetry was estimated by the adjusted rank correlation test.

Conclusion In this meta-analysis there was an overall statistically significant increased cancer risk associated with TNF-α-308 G/G and A/A genotypes. Subgroup analyses showed significant results for genotype G/G in Asians, whereas no such significant results were found for Caucasians and Hispanics.

Gastric cancer (GC) is one of the most common gastrointestinal malignancies worldwide and the second most common cause of cancer related death with over 600,000 deaths per year [1]. Helicobacter pylori (H. pylori) plays an important role in gastric carcinogenesis through physiological and histological changes that H. pylori infection induces in the stomach [2,3]. However, a striking difference exists between the number of infected individuals and the number that go on to develop GC [4-6]. Therefore a multifactorial etiology is possible, with H. pylori infection, dietary factors and host genetic susceptibility all playing a role in its development. Host genetic factors are emerging as key determinants of disease for many cancers [7,8], as genetic variations in pro-inflammatory and anti-inflammatory cytokine genes influence individual response to carcinogenic exposures. Various studies have evaluated the role of pro-inflammatory gene polymorphisms in GC and two recent meta-analyses have examined the role of interleukin (IL)-1 gene cluster polymorphisms in gastric carcinogenesis [9,10]. In addition to the IL-1 gene cluster, candidate genes include those encoding the pro-inflammatory cytokine tumor necrosis factor (TNF)-α and indeed studies on the association between TNF-α gene polymorphisms and gastric carcinoma have been published with discrepant results. A meta-analysis on this subject has been published some years ago [11]. However, in this meta-analysis population differences concerning TNF-α gene polymorphisms in gastric carcinogenesis have not been adequately addressed. The aim of this study therefore was to systematically review the role of TNF-α-308 and TNF-α-238 gene polymorphisms (genotypes G/G, G/A, A/A) in gastric carcinogenesis and in particular to look for population differences by meta-analyzing all relevant studies.

We searched the PubMed, Medline and Embase databases through May 2013 to identify all relevant English language medical literature for human studies under the search text terms; (“stomach neoplasms” OR “stomach” AND “neoplasms” OR “stomach neoplasms” OR “gastric” AND “cancer” OR “gastric cancer”) AND (TNF-α AND «polymorphism, genetic» OR «polymorphism» AND «genetic» OR «genetic polymorphism» OR «polymorphism»). We also performed a full manual search of all review articles, recently published editorials and of retrieved original studies. Data were extracted independently from each study by two of the authors (T.R. and D.P.) by using a predefined form, and disagreements were resolved by discussion with a third investigator and consensus.

Inclusion and exclusion criteria were delineated before the commencement of the literature search. Thus, eligible studies were included in this meta-analysis if they met all the following criteria: 1) published as full articles; 2) written in English; 3) to be cohort or case control studies. Studies not meeting the aforementioned criteria and in addition studies without data for retrieval and duplicate publications were excluded. When two papers reported the same study, the publication that was more informative was selected.

Agreement on the selection of studies between the two reviewers was evaluated by the κ coefficient. We calculated the pooled odds ratios (ORs) and 95% confidence intervals (CIs) and compared outcomes of individual studies by using the fixed effects model [12] (Mantel and Haenszel method), unless significant heterogeneity was present, where the random effects model [13] was used (DerSimonian and Laird method). Forest plots were constructed for visual display of ORs of individual studies. Heterogeneity between studies was evaluated with the Cochran Q test [14] and it was considered to be present if the Q test provided a P value of less than 0.10 [15]. In the presence of significant statistical heterogeneity, sensitivity analyses were performed to exclude any possible influence of a single study. These analyses were achieved by repeating the meta-analyses with exclusion of each individual study one at a time, in order to assess the overall effect of each study on the pooled ORs [15]. This indicates which particular studies are most influential and might help in the evaluation of the possibility that the conclusions result from the influence of a particular study. The likelihood of publication bias was assessed by constructing funnel plots which were obtained by plotting the log ORs vs. precision (1/SE) of individual studies [16]. Their symmetry was estimated by the Begg and Mazumdar adjusted rank correlation test [17], whereas the number of studies missing from a meta-analysis was estimated using Duval and Tweedie’s nonparametric ‘trim and fill’ rank-based method [18]. All analyses were performed by using Comprehensive Meta-analysis software (Version 2, BIOSTAT INC., Englewood, NJ, USA).

A flow chart describing the process of study selection is shown in Fig. 1. Out of 56 titles initially generated by the literature searches, 17 case control studies from various countries remained eligible for meta-analysis [19-35]. Initial agreement between the reviewers for the selection of relevant articles was high [κ = 0.94, 95% CI (0.86-1)].

One of the studies [28] contained separate data from two areas of Italy and therefore in the 17 meta-analyzed studies, conducted in different parts of the world, there were totally 18 sets of data comparing the TNF-α-308 and TNF-α-238 frequencies of genotypes G/G, G/A, A/A in GC patients and controls. The main characteristics of the papers eligible for meta-analysis are shown in Tables 1 and 2. 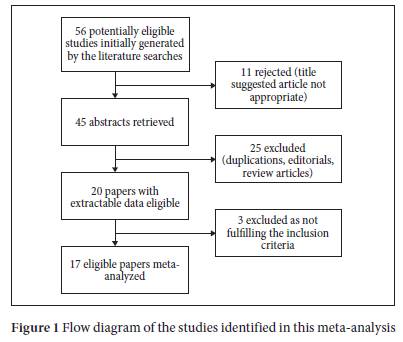 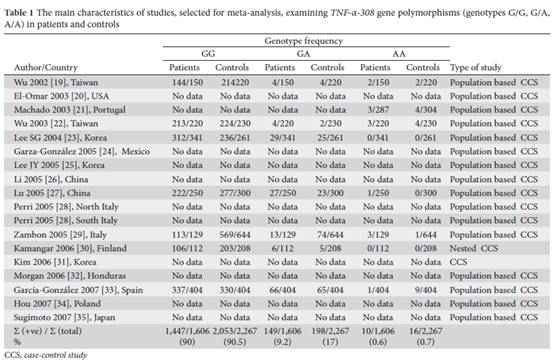 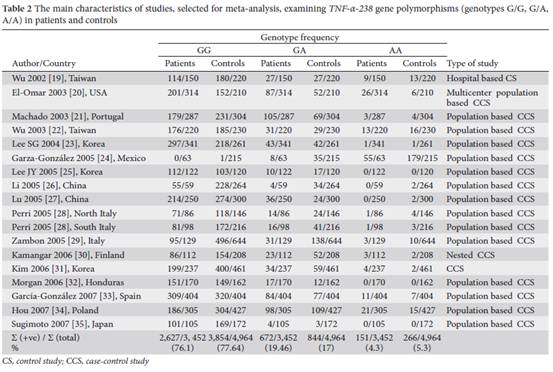 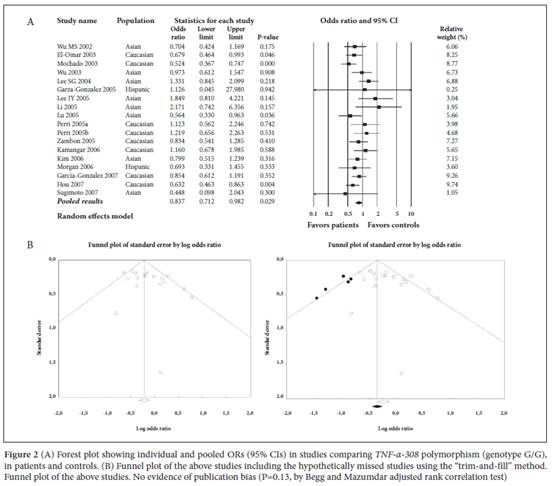 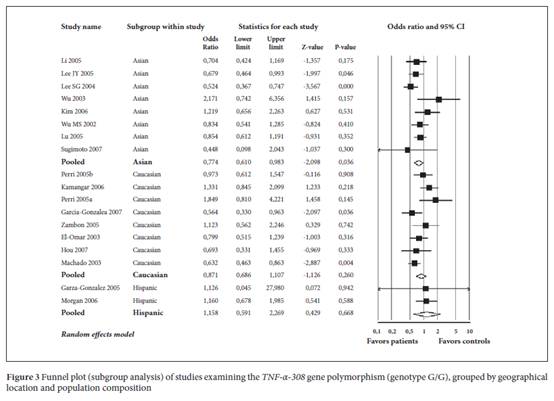 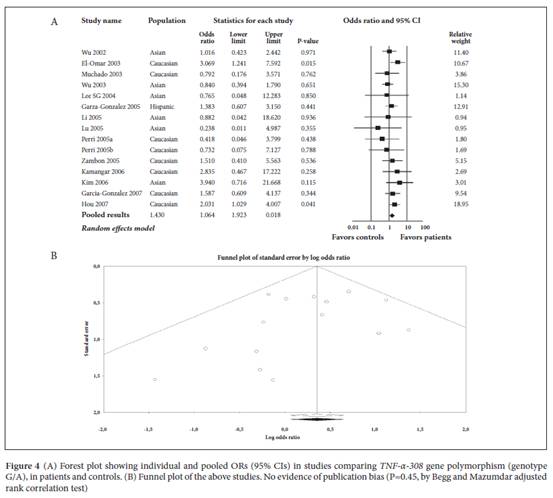 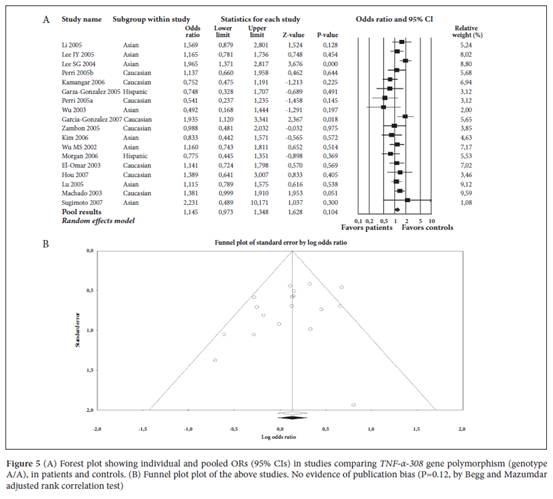 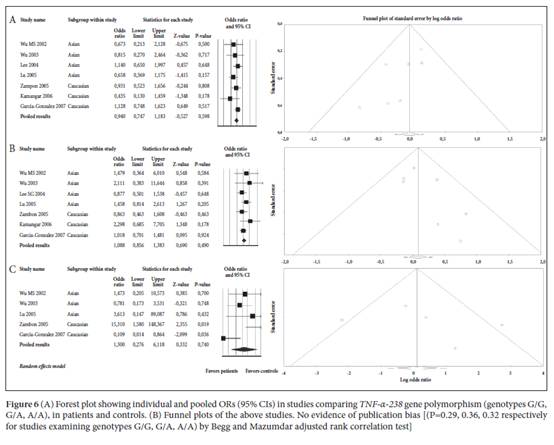 Besides environmental factors, cytokine gene polymorphisms have been linked to inter-individual differences in GC susceptibility. Indeed, host genetic factors are emerging as key determinants of disease for many cancers [7,8] as genetic variations in pro-inflammatory and anti-inflammatory cytokine genes influence individual response to carcinogenic exposures. Since El-Omar et al first reported an association between IL-1B and IL-1RN gene polymorphisms and an increased risk of gastric atrophy, as well as GC [36], many investigators have explored the association of these gene polymorphisms with the risk of GC. Two recent meta-analyses have explored the role of IL-1 gene cluster polymorphisms in gastric carcinogenesis [9,10].

In addition to polymorphisms in IL genes, the polymorphisms in the promoter region of TNF-α gene have been studied in relation to cancer. TNF-α is the most important proinflammatory cytokine involved in the growth, differentiation, cellular function and survival of many cells. It is produced by diverse kinds of cells, such as macrophages, neutrophils, fibroblasts, keratinocytes, NK cells, T and B cells, and tumor cells [37]. TNF-α has been reported to play an important role in the pathogenesis of cancer [38]. As transcription of TNF-α is regulated under genetic control, recent studies [39-41] have shown that its promotor polymorphisms at 2238 (rs361525), 2308 (rs1800629), 2857 (rs1799724), and 21031 (rs1799964) positions could regulate TNF-α production. Two polymorphisms in TNF-α gene have been studied in greater detail than others, i.e. TNF-α-308 and TNF-α-238; in fact TNF-α-308 polymorphism has been confirmed as a risk factor for a range of cancers, such as breast and hepatocellular cancers [42,43]. However, the significance of TNF-α-238 polymorphism is less clear, but because a putative repressor site is located in a 25-base stretch that includes position -238, this polymorphism has been associated with decreased susceptibility to cancers [44].

The results of our meta-analysis showed that overall there was no association between TNF-α-308 G/A genotype and GC risk, but there was an overall statistically significant increased risk associated with TNF-α-308 G/G and A/A genotypes. However, as shown by sensitivity (subgroup) analysis, this association was limited to studies in Asians and no association was found in studies concerning Caucasians and Hispanics. The reason for these discrepant results is unclear and differences in sample size, methodologies, ethnicities and dominance of different etiologic factors in different populations could contribute to this heterogeneity of results. However, studies have suggested that the frequency of genetic markers often shows high variation among various ethnic and racial groups [45,46]. No significant results were found concerning TNA-α-238 frequency for genotypes G/G, A/A, G/A and these results are similar to those found by others [47]. According to these results it seems likely that in Asians, TNF-α-308 gene polymorphism plays an important role as host genetic factor predisposing to gastric carcinogenesis and it could be used as a screening marker. Indeed, in countries like Japan this could be of particular importance since in this country many efforts have been made in screening and accurate early detection of GC [48,49], considering that half of the global total of GC occurs in Eastern Asia where the highest mortality rates are expected (28.1 per 100,000 in men, 13.0 per 100,000 in women) [50].

Among the strengths of this meta-analysis are the relatively large number of cases and controls, the methods we used to examine the robustness of our results and the fact that the statistically significant positive relationship we found was consistent over the years as judged by the results of the cumulative meta-analysis of studies, ordered by the year of publication. However, we acknowledge that this meta-analysis also has limitations, such as the significant heterogeneity found in some of the analyses. We tackled this problem by assessing the homogeneity of the effects across studies using suitable heterogeneity tests, sensitivity, meta-regression and publication bias analyses as outlined in detail in the statistical analysis section.

In conclusion, in this meta-analysis the comparison of genotype frequencies between the control group and individuals with GC showed that there was a statistically significant increased risk associated with G/G and A/A genotype which was limited to studies from Asian countries, whereas no association was found in studies concerning Caucasians and Hispanics. According to these results it seems likely that in Asians, TNF-α-308 gene polymorphism plays an important as host genetic factor predisposing to gastric carcinogenesis. However, since the magnitude of each etiologic factor might differ among populations, large studies examining the interaction between host genetic factors and environmental factors, in association with anatomical or histological subtypes of GC and H. pylori positivity, in different geographic areas and ethnic groups, are required to elucidate the real significance of host genetic factors in gastric carcinogenesis.