Background Magnifying endoscopy with narrow-band imaging (ME-NBI) and a simple and systematic classification system based on microvascular and microsurface patterns, the ”VS” classification system (VSCS), have been shown to be useful for the diagnosis of early gastric cancer. The aim of this study was to clarify whether an educational lecture about the VSCS improves performance with ME-NBI.

Conclusion This study revealed that an educational intervention increased correct diagnosis rate of small gastric lesions using the VSCS, diagnosis criteria based on ME-NBI and also showed that the routine use of the modality and the diagnosis criteria was necessary to maintain diagnostic skills.

Gastric cancer represents the second leading cause of cancer death worldwide, with some 50,000 individuals dying annually from the disease in Japan, where early endoscopic detection of gastric cancer remains the cornerstone that contributes not only to a decrease in mortality from gastric cancer but also to optimization of care, with the use of endoscopic mucosal resection (EMR) or endoscopic submucosal dissection (ESD) being reserved for a subset of patients with early gastric cancer. However, endoscopic diagnosis of gastric lesions, particularly differential diagnosis of small benign versus malignant lesions in the stomach, remains far more difficult than that in the colon and rectum with colonoscopy, due to the background presence of chronic inflammation associated with Helicobacter pylori infection [1].

To date, various modalities and image enhancement techniques have been developed to improve the accuracy of endoscopy-based diagnosis. Briefly, in addition to chromoendoscopy [2-4], acetic acid spray [5], and magnifying endoscopy [6], recently, narrow-band imaging (NBI) [7], autofluorescence imaging [8], and endocytoscope with a 450-fold magnification power [9], have been reported to have great promise in improving diagnostic accuracy. However, the usefulness of these novel diagnostic modalities involving the use of cutting-edge equipment has mainly been reported from tertiary care centers, such as university hospitals, with most of these modalities remaining still less readily available for clinical use in general hospitals and clinics.

Of these, the NBI and magnifying endoscopy have recently become available in a considerable number of hospitals in Japan, where the NBI has become established as a modality that allows recognition of squamous epithelial lesions in the laryngopharynx and esophagus as “brownish areas”, as well as detailed, qualitative studies of the intraepithelial papillary capillary loops of the squamous mucosa when combined with magnifying endoscopy [10].

As it involves the use of an optical filter with narrow-band transmission, however, the NBI is less well suited for detection of lesions in the stomach with wide lumens. On the other hand, the NBI combined with magnifying endoscopy (ME-NBI) allows differential diagnosis of gastric lesions [11-15] as well as determination of gastric cancer margins [16-17], although ME-NBI still remains less well established among endoscopists, with disparate diagnostic classifications proposed for ME-NBI-guided diagnosis [11-15]. Of the classifications reported to date, the VS classification system (VSCS) proposed by Yao et al [14,15] as a simple yet comprehensive classification, appears to have great potential for widespread use.

However, no study has been conducted, to date, to investigate whether an educational intervention may result in improvements in diagnostic accuracy.

The present study included gastrointestinal endoscopists who consisted of Japan Gastroenterological Endoscopy Society board-certified (specialist) and non-board-certified (non-specialist) endoscopists including trainees from the Hokkaido area, Japan, to receive a lecture on the VSCS in order to compare the accuracy of ME-NBI-based diagnosis of random, sample ME-NBI images of gastric lesions among the participants before and after the lecture.

In conjunction with the use of the ME-NBI images, it was ensured that all personal information, such as patient name, ID number, sex, and age, by which an individual could be identified, was omitted from the images. Approval was obtained from the institutional review board of the Hokkaido University Hospital for this study using ME-NBI images from patients treated at another tertiary care center to compare diagnostic outcomes.

Three sets of questions were developed by the instructor with each involving a total of 20 ME-NBI images of small gastric mucosal lesions (10 non-cancerous and 10 cancerous lesions). The exams consisted of multiple-choice questions that had to do with: 1) the demarcation line (DL); 2) the microvascular pattern; 3) the microsurface pattern; and 4) endoscopic diagnosis (1. benign; 2. potentially benign; 3. potentially malignant; 4. malignant; and 5. unknown) (Fig. 1). The participants were blinded to the content of the exam questions and the histological diagnosis of each lesion used during the exams.

The educational lecture was given by the advocate of the VSCS (K.Y.) on January 12, 2011, in which still ME-NBI images were used to illustrate the VSCS-based, ME-NBI-guided diagnosis. Prior to the lecture, the participants were given instructions about the exams and how to answer the exam questions. Participants took the 1st exam before receiving the lecture about VSCS, the 2nd exam immediately after the lecture, and the 3rd exam 2 months later to compare the accuracy of VSCS-based diagnosis among the participants (Fig. 2). Gastric cancers were diagnosed in the exams in accordance with the VSCS, i.e., in terms of the presence of an irregular microvascular pattern with a demarcation line or the presence of an irregular microsurface pattern with a demarcation line. All completed answer sheets for each exam were collected from the participants at the completion of the study. 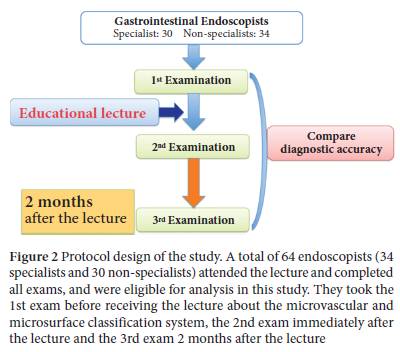 The main outcome measure was the improvement in the proportion of correct diagnosis after the lecture. A correct diagnosis was judged to have been made in accordance with the VSCS in the exams if the diagnosis made was consistent with the findings identified on the demarcation line, the microvascular pattern, and the microsurface pattern, which represented the major diagnostic components of the VSCS, and thus met the VSCS criteria. In addition, it was calculated separately in malignant lesions and benign lesions. In detail, the proportion of correct diagnosis was individually calculated as the number of the correct diagnosis divided by the number of questions, and then their means were calculated. The means were compared by using the t-test (between unpaired two groups), ANOVA with post hoc Tukey Kramer test (between more than two unpaired groups), paired t-test (between two paired groups), or multiple paired t-test with Bonferroni’s correction (between more than two paired groups). Other continuous variables were also compared by using the t-test. Categorical variables were compared by using Fisher’s exact test or chi-square test. Ordinal variables were compared by using Mann-Whitney test. All statistical analyses were performed by using SPSS 20 (IBM). P values of <0.05 were considered statistically significant.

A total of 64 endoscopists (34 specialists and 30 non-specialists) attended the lecture, completed all exams and were eligible for analysis in this study. The characteristics of participants are summarized in Table 1. There was a significant difference between the specialists and the non-specialists with regard to experience with endoscopy, magnifying endoscopy, and ESD. However, there was no difference between the groups with regard to their possession of textbooks describing the VSCS, participation in VSCS-related lectures, and frequency of use of magnifying endoscopy (Table 1). 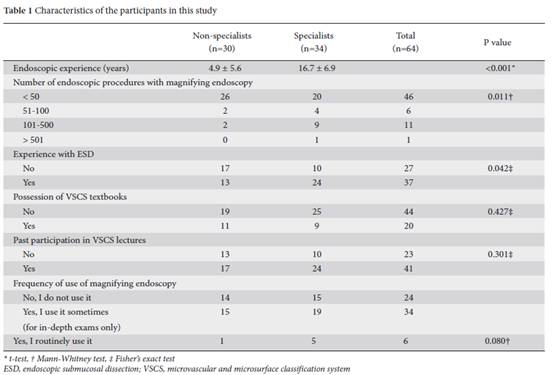 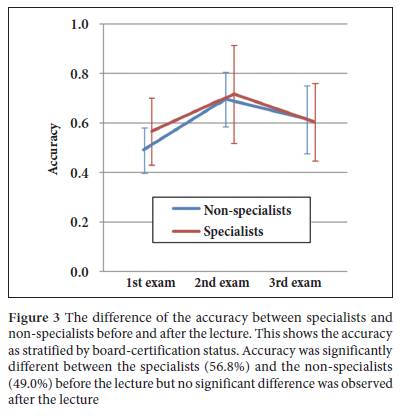 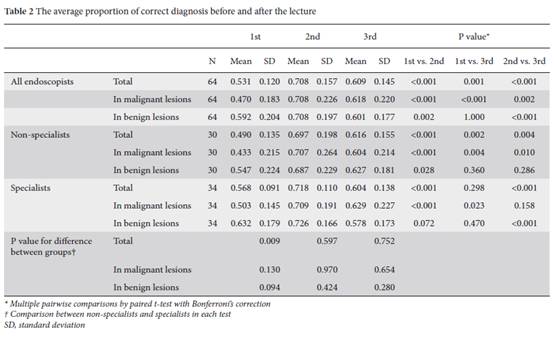 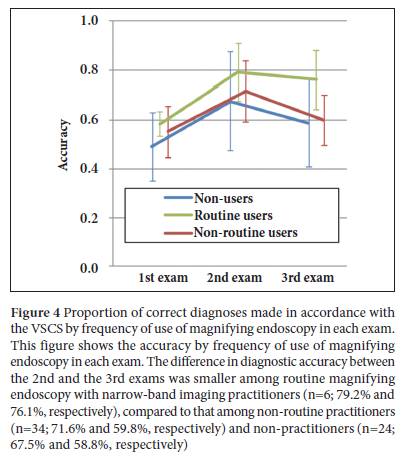 Early endoscopic diagnosis of gastric mucosal lesions, particularly differential diagnosis between non-cancerous and cancerous lesions, is critically important in determining or obviating the need for endoscopic biopsy or therapy.

Commercially available NBI systems allow the endoscopists to alternate readily between normal white-light and NBI viewing modes simply by pressing a button on the handle of the endoscope. However, the ME-NBI has remained less well established as a diagnostic modality among the endoscopists, with various diagnostic classifications proposed for ME-NBI-guided diagnosis [11-15].

In this regard, the VS classification system (VSCS) proposed by Yao et al [14,15] is of particular interest, in that it draws on a combination of findings on 1) the demarcation line; 2) the microvascular pattern; 3) the microsurface pattern, where any lesion with a demarcation line and an irregular microvascular pattern or/and an irregular microsurface pattern is diagnosed as gastric cancer, with all other lesions which fail to meet these criteria diagnosed as non-cancerous lesions. While some of the proposed classifications are intended for in-depth diagnosis including the histological type of tumor, the VSCS represents a simple yet comprehensive diagnostic classification system which is readily available for widespread use among specialist and non-specialist endoscopists alike.

Our study findings showed that educational lectures on the VSCS improve the ability of both specialist and non-specialist endoscopists to correctly diagnose small gastric lesions using ME-NBI and this improvement appears to have been accounted for by improvement in VSCS-based diagnosis, demonstrating both the utility of the VSCS in the diagnosis of gastric lesions and the usefulness of educational lectures on the VSCS in improving diagnostic accuracy. This study also revealed that the routine use of ME-NBI and the VSCS was necessary to maintain high diagnostic accuracy after the educational lecture.

Although the VSCS and the ME-NBI were used for the differential diagnosis of small gastric lesions in this study, both the VSCS and the ME-NBI are also shown to be useful in the recognition of gastric cancer demarcation lines [15,17,18], which is particularly important for en bloc resection in ESD which allows resection of large lesions. In this regard, the educational lecture on the VSCS-based, ME-NBI-guided diagnosis as it was given in this study was also thought to assist in determining gastric cancerous margins.

The present study has some limitations. It is not an in vivo study. The diagnostic process can be divided into two steps, detection and characterization [20]. While endoscopic diagnosis in a real-world, clinical setting calls for ME-NBI-based imaging techniques, as well as the ability to perform real-time detection technique and diagnoses, in addition to the diagnostic capabilities evaluated in this study, the study used only still images taken by an expert endoscopist in comparing diagnostic performance. Indeed, a tailored training program is required to enable endoscopists to perform accurate ME-NBI-guided diagnoses, as shown in the ME-NBI-guided diagnosis of colorectal lesions [21,22]. Thus, this limitation needs to be taken into account when considering the study and its contributions.

On-site educational lectures by expert endoscopists may also have limited contributions to improvement in diagnostic performance. In this regard, web-based training programs have been reported to be useful [23], suggesting that future educational lectures may have greater contributions when presented in media that provide a larger number of physicians with the benefit of repeated learning and testing, such as web-based programs or DVDs.

In conclusion, an educational lecture about the VSCS improved the accuracy of ME-NBI-guided diagnosis of gastric mucosal lesions. The routine use of VSCS-based ME-NBI may be required to maintain high diagnostic performance as well as to obviate the need for biopsies to rule out malignancies and allow safe and early diagnosis of gastric cancer.

22. Ignjatovic A, Thomas-Gibson S, East JE, et al. Development and validation of a training module on the use of narrow-band imaging in differentiation of small adenomas from hyperplastic colorectal polyps. Gastrointest Endosc 2011;73:128-133.