Low-volume polyethylene glycol and bisacodyl for bowel preparation prior to colonoscopy: a meta-analysis

Colonoscopy continues to remain the preferred procedure of investigation of diseases of the colon and terminal ileum. An adequate colonoscopy requires adequate visualization of the colonic and terminal ileum mucosa. Inadequate visualization increases the possibility of missed lesions, prolongs procedure time, and increases patient discomfort [1]. In addition, there is an increase in the cost of colonoscopy if the procedure needs to be repeated due to an inadequate preparation [2]. The ideal preparation for colonoscopy would empty the colon of all fecal material without any effect on the histological or endoscopic appearance of the mucosa. Furthermore, it would be palatable to the patient, require a short period of ingestion, cause no patient discomfort, and would have minimal fluid shifts [3].

Since the introduction of polyethylene glycol (PEG) in 1980, PEG solutions have quickly become the preferred method of bowel cleansing [4]. Due to the large volume which is required for adequate cleansing, patient tolerance can be low. Given that over 14 million colonoscopies are performed in the United States annually [5], the costs associated with inadequate bowel preparation can be significant [6]. One of the more important predictors of a poor bowel preparation is a patient’s inability to complete the preparation due to the large volume which needs to be consumed [6].

In an effort to improve patient tolerance of PEG solutions, several studies have been performed examining low-volume PEG solutions using an adjunct, such as ascorbic acid, magnesium citrate, or bisacodyl [7-11]. Patient compliance, tolerance, and quality of bowel preparation have differed among randomized trails evaluating low-volume PEG and bisacodyl. Therefore, we conducted a meta-analysis to evaluate low-volume (2 L) PEG with bisacodyl versus full-dose (4 L) PEG for bowel preparation prior to colonoscopy.

PubMed, Cochrane Central Register of Controlled Trials & Database of Systematic Reviews, and CINAHL were searched through June 2012. The search terms were bowel preparations, polyethylene glycol, and bisacodyl. All references from selected RCTs were reviewed to ensure no additional trials were omitted from the primary searches. Only RCTs in peer-reviewed journals on adult subjects comparing low-volume PEG (2 L) with bisacodyl versus 4 L PEG were included. Data extraction was performed by two independent reviewers using standard forms. Each study was evaluated by a Jadad score (0-5 with 5 indicating excellent quality and 0 indicating poor quality) [12] and criteria based on Juni et al [13] to assess the quality of the study.

A meta-analysis was performed comparing low-volume PEG with bisacodyl and 4 L PEG for bowel preparation prior to colonoscopy by calculating pooled estimates of quality of bowel preparations (satisfactory, excellent, and poor) as well as adverse patient events (abdominal pain, nausea, vomiting, bloating). Given slightly different bowel preparation scales being used (Aronchick, modified Aronchick, and Ottawa bowel preparation scales), the quality of preparation (satisfactory, excellent, poor) was defined based upon each authors definitions in the individual studies. Separate analyses were performed for each main outcome by using odds ratio (OR) with fixed and random effects models. Heterogeneity among studies was assessed by calculating I² measure of inconsistency which was considered significant if P<0.10 or I2>50%. If heterogeneity was statistically significant, a study elimination analysis was utilized to examine for heterogeneity when certain studies were excluded from the analysis. RevMan 5.1 was utilized for statistical analysis.

The initial search identified 207 articles (Fig. 1). Six studies satisfied the inclusion criteria (N=1,540) with a mean age ranging from 50 to 63 years. Table 1 shows a summary of the details in each study. All studies used 2 L PEG with bisacodyl with varying dosages and 4 L PEG. Huppertz-Hauss et al used 10 mg of bisacodyl while Adams et al used 15 mg of bisacodyl [14,15]. All other studies used 20 mg of bisacodyl [11,16-18]. A majority of the studies utilized full-dose bowel preparation with all of the preparation taken the night prior to the procedure [11,14,16,17]. Two studies did perform split-dose regimen in patients with afternoon appointments only, in which some of the preparation was taken the night before the colonoscopy and the remaining preparation taken the day of the procedure [15,18]. 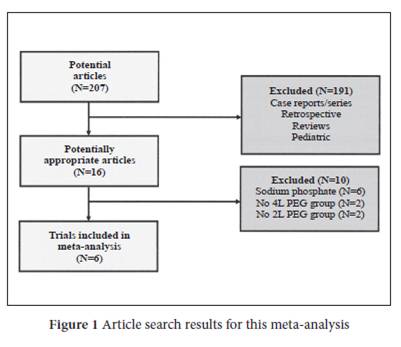 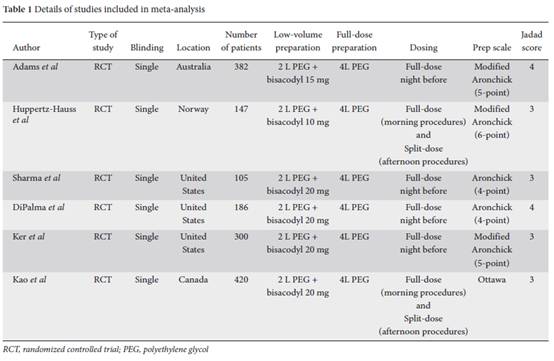 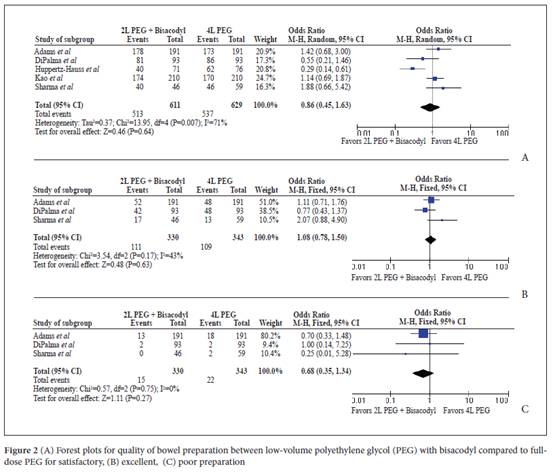 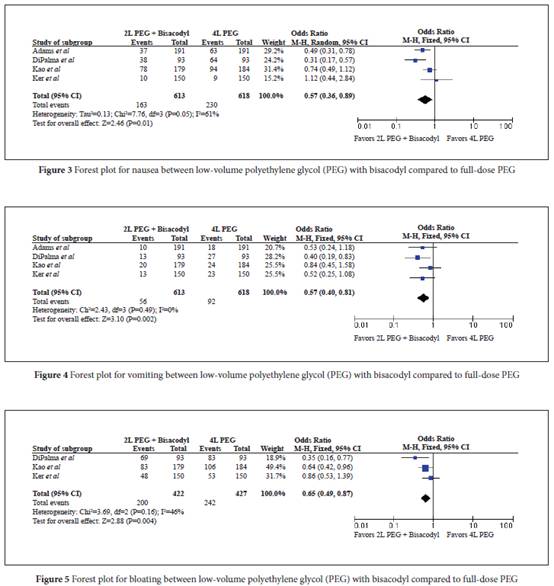 No significant publication bias was observed for any of the outcomes by the funnel plot (Fig. 6). 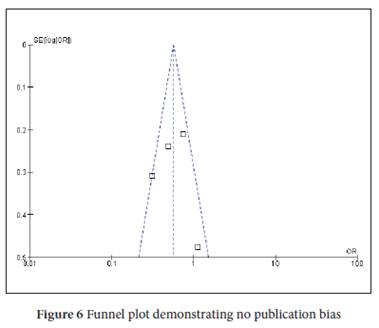 The success of a colonoscopy is largely determined by the quality of the bowel preparation. With over 14 million colonoscopies being performed annually in the United States for colon cancer screening purposes alone, the cost of a poor preparation can be substantial [5,6]. Patient’s tolerance to bowel preparation has mostly been attributed to the large volume required to adequately cleanse the bowel. As many as 38% of patients do not complete the bowel preparation due to palatability and/or intolerance to the large volume required [19,20]. As a result, numerous studies have been performed using a lower volume of PEG solution in an effort to increase tolerability. Several adjuncts have been studied using a smaller volume of PEG solution (2 L), including bisacodyl, senna, magnesium citrate, and ascorbic acid with varying results [7-11,19].

Our meta-analysis was conducted to examine the effects of 2 L PEG solution with bisacodyl as compared to 4 L PEG. Only RCTs in adult patients were evaluated and used in this study. Based on our results, low-volume PEG (2 L) with bisacodyl (10-20 mg) offers major benefits in clinical practice as it demonstrates less nausea, vomiting and bloating, without adversely affecting the bowel preparation. Therefore, low-volume PEG with bisacodyl may be considered an alternative to the traditional full-dose (4 L) PEG for bowel preparation prior to colonoscopy.

The strengths of this meta-analysis include the use of only RCTs in varying populations and significant endpoints that are applicable to clinical practice. In addition, this represents the first meta-analysis to date on the subject of low-volume PEG with bisacodyl. Limitations to this study are as follows. First, this meta-analysis only addressed low-volume PEG with bisacodyl as compared to full-dose PEG. There are other adjuncts and methods of bowel preparation which are in use and studied, such as senna, vitamin C, magnesium citrate, and split dose preparations, were beyond the scope of this analysis. Second, a limited number of studies were available to be included in this analysis; however, these are the only studies to-date on this topic. Third, the dosage of bisacodyl used varied from 10 to 20 mg depending on the study. Fourth, heterogeneity was noted for two outcomes (satisfactory preparation and nausea). In response, a random effects model was utilized to minimize the heterogeneity effect. Also, a study elimination analysis was performed in which the results were the same without heterogeneity (satisfactory preparation –

In conclusion, our meta-analysis shows that low-volume (2 L) PEG with bisacodyl demonstrates less nausea and vomiting without adversely affecting the bowel preparation. Therefore, low-volume PEG with bisacodyl appears to be a reasonable alternative to the traditional 4 L PEG for bowel preparation in appropriate patients. However, given the increased risk of ischemic colitis with larger doses of bisacodyl and PEG, additional randomized controlled trials with low-dose bisacodyl and PEG would be extremely beneficial.