Expression of cyclooxygenase-2 in gastritis and gastric premalignant lesions

Cyclooxygenase (COX)-2, the protein that plays a key role in gastric carcinogenesis, is being evaluated as a pharmacological target for both the prevention and treatment of cancer [1,2]. Tumor promotion may be attributed to the stimulation of cell proliferation and migration, the inhibition of apoptosis, the increase in malignant cell invasiveness and the induction of angiogenesis [1-3].

We aimed to immunohistochemically evaluate COX-2 expression in patients with chronic gastritis and premalignant lesions and to assess its possible association with the sequence of normal epithelium, inflamed epithelium, atrophic gastritis, intestinal metaplasia and gastric dysplasia.

A total of 153 patients who underwent upper gastrointestinal tract endoscopy due to dyspeptic symptoms between December 2010 and June 2012 were included in the study. There were 84 males and 69 females, whose mean age was 59 (range: 28-89) years.

Biopsies were obtained from pyloric antrum, incisura angularis, and gastric corpus in order to determine their histological status. The diagnosis of gastritis and premalignant lesions was based on the Houston modification of the Sydney classification. COX-2 expression was detected by a monoclonal antibody from the Santa Cruz Biotechnology Company, California, USA. Immunohistochemical staining was scored by two independent observers with a concordance of 80% on a scale of 0-3, based on the number and intensity of stained cells. It should be taken into account that in each of our specimens, COX-2 immunoreactivity was graded after examination of all available tissue including areas of atrophy, metaplasia and dysplasia, when observed. For each specimen the percentage of stained cells was determined. In cases with different percentages scored by the two observers, the slides were reexamined under simultaneous microscopy and a final percentage was determined. 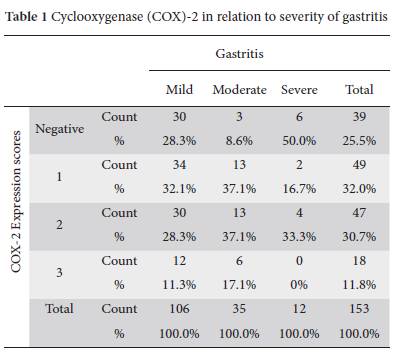 Moreover, there was a weak correlation between COX-2 expression scores and presence of atrophic gastritis, intestinal metaplasia, or dysplasia in patients with chronic gastritis (x2 = 6.98, P<0.10).