Complications of percutaneous endoscopic gastrostomy (PEG) tubes range from simple infections to deleterious effects of tube misplacement [1]. We present a unique case of external migration of a PEG tube through a pre-existing post-gastrostomy gastrocutaneous fistula.

A 66-year-old lady was admitted due to a leak around the PEG tube. Following failure of conservative measures, the tube was removed and the patient was fed through a naso-jejunal tube to facilitate healing of the resultant gastrocutaneous fistula. After 4 weeks, a new PEG tube with jejunal extension was inserted 3 cm proximal to the original site.

Two days later, the patient developed severe sepsis requiring aggressive resuscitation. Abdominal inspection revealed external projection of the ‘J’ extension from the abdominal wall through the old PEG site and endoscopy confirmed the unusual finding (Fig. 1A). Subsequently the “J” tube was repositioned into the second duodenum and clipped in place. Eventually an over-the-scope (OVESCO) clip was applied endoscopically to close the gastrocuteneous fistula and the leakage stopped (Fig. 1B).

This case reveals an unprecedented complication. Persistence of gastrocutaneous fistulas after removal of gastrostomy tubes is common, particularly when the tube had been in place for long periods. Spontaneous healing is the most frequent outcome [2]. The migration of a new feeding tube through the fistula has not been described before and, albeit very unlikely, should be taken into consideration. The OVESCO system is currently a recommended practice in management of non-spontaneously healing gastocutaneous fistulas [3]. The early use of an OVESCO clip may prevent such complications. 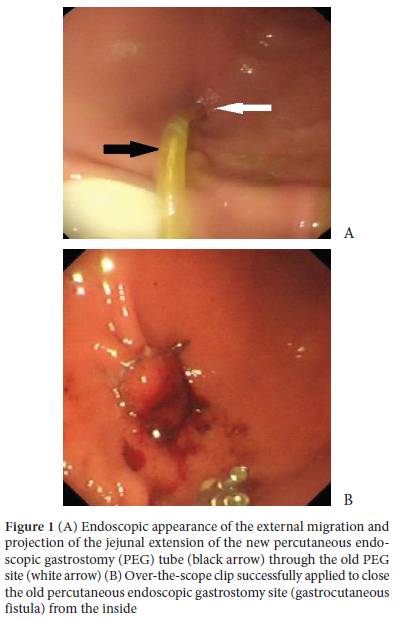