A 78-year-old male presented with acute abdominal pain and a progressively distended abdomen. Direct questioning revealed a 3-month history of abdominal discomfort, weight loss of 22 kg and 2 episodes of hematuria. The only relevant past medical history was type 2 diabetes mellitus treated with vildagliptin/metformin for 3 years.

A nasogastric tube was placed without difficulty. The impressive volume of 9.5 L of bilious material was withdrawn. After gastric decompression the patient became hemodynamically stable. Clinical, laboratory findings and electrocardiographic abnormalities (sinus tachycardia with T-wave inversion in leads V3-6) improved. Abdominal x-rays showed no findings of pneumoperitoneum. Intra-abdominal pressure was 12 cmH2O (grade I intra-abdominal hypertension according to the Burch system). Upper GI images with Gastrografin® showed a massively dilated stomach, no extravasation, normal pyloric channel and an abrupt stricture at distal duodenum. A contrast-enhanced CT scan revealed: a) an enhanced mass along the left lateral bladder wall with obstruction of the left ureteric orifice and invasion to the perivesical fat; b) para-aortic, para-caval, retrocrural lymphadenopathy; c) an infiltrative mass in the retroperitoneum causing obstruction of the third portion of duodenum (Fig. 1); and d) multiple pulmonary metastases in lower zones (T3b/N3/M1 disease). Cystoscopy revealed a solid bladder tumor (poorly differentiated transitional cell carcinoma), with obstruction of the left ureteric orifice and diffuse diverticula. Bilateral ureteral stents were placed. Unfortunately on day 2, the patient developed an episode of atrial fibrillation, which failed several attempts of cardioversion and he finally expired. 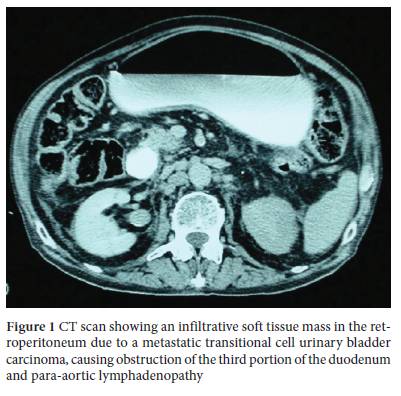 In summary, the advanced stage of the primary urinary bladder cancer prompted the diagnosis of metastatic retroperitoneal tumor with infiltration of distal duodenum. Several cases of massive AGD have been described worldwide but to our knowledge this is the second due to bladder cancer metastasis to the duodenum [3]. What is interesting in our case is that the stomach was massively distended; however no perforation occurred. To our knowledge this is the first case reported in which 9.5 L of gastric fluid were initially aspirated without gastric rupture [4]. Another remarkable fact is that our patient was unable to vomit. Although emesis is the dominant symptom, inability to vomit has also been reported and can be explained by occlusion of the gastroesophageal junction by the distended fundus, which angulates the esophagus against the right crus of the diaphragm [5].