A 73-year-old woman with choledocholithiasis was referred to our department for ERCP. She was overweight and had a history of hypertension but despite that she was very fit. She did not report any allergic diathesis to iodine-containing contrast media drugs, food, history of asthma, urticaria, or allergy to insect bites. ERCP was performed, under conscious sedation with intravenous (iv) injection of midazolam, with the patient in prone position and demonstrated a dilated common bile duct (diameter 12 mm) with two stones. She had an uncomplicated endoscopic sphincterotomy (ES) with successful basket clearance of stones. The patient was transferred to the ward for post-procedure follow up. The nurse observed the development of a unilateral left facial swelling (Fig. 1) from the upper mandible to the upper lid. The patient did not report any abdominal pain, while the abdomen was soft with no tenderness and no subcutaneous emphysema was noticed over the face and neck. Chest and abdominal CT scans were negative for retroperitoneal air. Hematological and biochemical profile including C-reactive protein and erythrocyte sedimentation rate were normal. After consulting with the ENT surgeon, observation was decided. The patient had an uneventful post-procedure course with resolution of facial swelling after 6 h. She was discharged the following day and remains well. 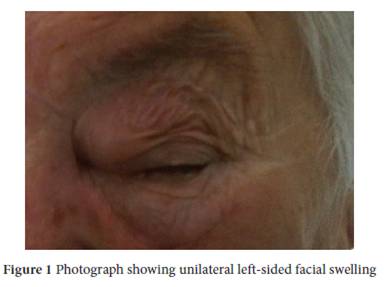 Appearance of facial swelling after ES due to subcutaneous emphysema is an unusual first sign of retroperitoneal perforation [1]. Radiological imaging reveals extensive retroperitoneal and mediastinal air [2]. There is no clear explanation of our patient’s unilateral facial swelling. We suppose that the facial swelling is related with patient’s position during ERCP; local pressure of the face’s left-side led to exudation of fluids in the interstitial space and unilateral facial swelling. The rapid resolution of swelling strengthens our hypothesis. An alternative explanation of our patient’s unilateral facial swelling might be due to an acute allergic reaction after receiving midazolam [3], a short-acting benzodiazepine frequently used for conscious sedation for a variety of endoscopic procedures. Facial edema after iv injection of midazolam was also observed during cesarean section [4]. However, in our case no other relative symptoms attributed to potential midazolam allergic reaction such as pruritus were observed.

In conclusion, the occurrence of facial swelling after ERCP is not always related to subcutaneous emphysema due to ES perforation.