Boerhaave’s syndrome as an initial presentation of eosinophilic esophagitis: a case series

Background Prior studies report esophageal rupture following endoscopy or bolus impaction in eosinophilic esophagitis (EoE). The purpose of this study is to add new information to available evidence defining the clinical spectrum of spontaneous rupture (Boerhaave’s syndrome) associated with vomiting in EoE.

Results In ten years, 447 patients were identified with a diagnosis of EoE. Of these, four patients presented with Boerhaave’s syndrome in the setting of EoE. None of the patients had an established diagnosis of EoE prior to presentation. All cases presented with a triad of vomiting, chest pain and pneumomediastinum. In two patients, water-soluble contrast extravasation prompted surgical intervention (50%). Full thickness surgical specimen provides a unique opportunity to show eosinophils in the muscularis propria. Intraepithelial eosinophil infiltration was seen on all mucosal biopsies (>25/hpf) with significant improvement after steroid (topical or systemic) treatment.

Conclusions Spontaneous esophageal rupture is a rare (4/447, less than 1%) but critical presentation of EoE manifesting with vomiting, chest pain and pneumomediastinum. Surgery is required if extravasation is seen with water-soluble contrast. We suggest that EoE may be a transmural disease in some patients, thus making the esophageal wall susceptible to spontaneous rupture with vomiting (Boerhaave’s syndrome).

Eosinophilic esophagitis (EoE) was first described in adults as a distinct clinical disease characterized by esophageal mucosal eosinophilia and symptoms of gastrointestinal reflux disease in the absence of response to acid-suppression therapy [1]. Subsequently, EoE has been defined as a clinicopathologic disease characterized by dysphagia to solid foods or other esophageal dysfunction and dense eosinophilic infiltration of mucosa on histologic examination with exclusion of other eosinophilic infiltrating etiologies [2]. A variety of endoscopic features support the diagnosis including linear furrowing, white plaques indicating eosinophilic abscesses and the presence of rings.

The adult form of EoE is most common in young males with a history of allergies and long-standing or recurrent dysphagia and food impaction [3,4]. Although esophageal strictures, narrowing and food impaction are the major complications, esophageal perforation is rarely described in association with eosinophilic esophagitis. Straumann [5] in 2003 proposed an increase in mucosal fragility secondary to eosinophilic infiltration as demonstrated by mucosal tearing in response to dilation (“crêpe-paper” sign). Indeed, case reports [6,7] describe examples of esophageal integrity compromise, even rupture in EoE during endoscopy [8,9], or in association with food bolus impaction [10-14]. Lucendo et al [15] recently describe two cases of esophageal rupture associated with food impaction in EoE and compile the cases previously reported in the literature [6,7,9-15]. However, to date, only two cases of spontaneous esophageal perforation (Boerhaave’s syndrome), independent of iatrogenic causes or food impaction have been described to our knowledge [9,16] including one case reported earlier by our group.

Here we present four cases of spontaneous esophageal rupture (Boerhaave’s syndrome), notably in the absence of advanced endoscopic disease, food impaction or iatrogenic injury. We hypothesize a broadened clinical spectrum for the complications of EoE exists, possibly dependent on the depth of eosinophilic infiltration through the esophageal wall.

A retrospective search was conducted to identify patients presenting with esophageal rupture from January 2001 to January 2011 at an urban tertiary care hospital in the northeastern United States. The computer database was queried for the diagnoses “Boerhaave’s”, “eosinophilic esophagitis” and “esophageal perforation”. For each subject identified, medical records, endoscopy reports, biopsy reports and radiographic studies were reviewed. Patients were excluded if: 1) esophageal perforation was in the clinical setting of malignancy, intrathoracic infection, iatrogenic injury or foreign body; or 2) no follow-up information was available after hospital discharge. A faculty member of the Department of Pathology blindly reviewed all esophageal biopsy specimens. EoE was defined as 15 or more eosinophils in at least 2 high-power fields (hpfs) or 25 or more eosinophils in any single hpf. The study design and data collection methods were approved by the institutional review board at Thomas Jefferson University Hospital, Philadelphia, PA.

Four hundred and forty-seven patients carried a diagnosis of EoE at our institution. Independently, sixty-six patients presented to Thomas Jefferson University Hospital between 2001 and 2011 with esophageal perforation or rupture due to all causes. Four patients (4/66 or 6%) were found to have new diagnosis of EoE and spontaneous esophageal rupture independent of food impaction or endoscopic procedure. This means that less than one percent of patients with EoE at our institution have presented with Boerhaave’s syndrome (4/447). Here we describe the clinical, radiographic and pathological findings observed in these cases (Table 1).

A 56-year-old Caucasian male with a history of asthma, seasonal allergies, and occasional heartburn presented with nausea and vomiting followed by chest and epigastric pain. Computed tomographic (CT) scan revealed air and fluid surrounding the esophagus from the level of the bronchial bifurcation through the gastro-esophageal junction (GEJ), consistent with esophageal rupture complicated by pneumomediastinum and medastinitis. Patient was taken to the operating room and underwent primary repair of a 5-cm perforation located 3-cm proximal to the GEJ. Postoperative course was complicated by 3 months of continuous drainage from the site of rupture requiring mediastinal lavage and bilateral chest tubes. At 9-month follow up, the patient reported symptoms of heartburn, regurgitation and dysphagia to solid foods. Esophagoscopy revealed a characteristic feline appearance and biopsy showed intact squamous mucosa with a diffuse intraepithelial eosinophilic infiltrate exceeding 30 eosinophils per hpf, consistent with EoE. The patient was treated medically with a proton pump inhibitor and oral fluticasone.

A 43-year-old Caucasian male with history of intermittent solid food dysphagia presented to emergency room with sudden onset nausea, vomiting, and intense epigastric pain. Thirteen years prior to presentation patient had a spontaneous esophageal rupture for which he underwent left thoracotomy and primary repair complicated by  prolonged leakage of the esophagus requiring chest tube drainage. Work up at that time identified no obvious etiology.

On this presentation, CT scan revealed mediastinal air below the level of the carina compatible with rupture of the distal esophagus (Fig. 1A). Water soluble contrast swallow demonstrated extravasation of contrast at the right aspect of the distal esophagus just above a narrowing with evidence of contrast draining above and below the diaphragm as well as air tracking into the mediastinum (Fig. 1B). The patient underwent esophageal resection, cervical esophagostomy and jejunostomy. Intra-operative esophagoscopy revealed a ringed or feline appearance to the esophagus and a 1-cm rupture just proximal to the gastroesophageal junction. Full thickness resection specimen revealed increased transmural eosinophilia with multiple fields demonstrating >25 eosinophils/hpf and up to 55 eosinophils/hpf, consistent with EoE (Fig. 2A and insert). 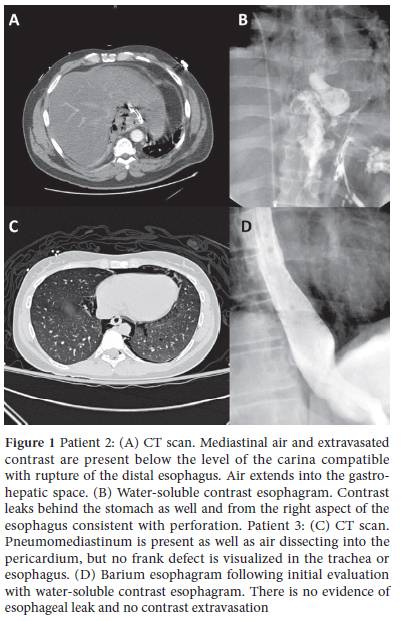 A 26-year-old Caucasian female with a history of asthma presented with 2 days of nausea, vomiting and subcutaneous chest wall crepitus. She was found to have pneumomediastinum and pneumopericardium with subcutaneous emphysema on CT scan (Fig. 1C). Contrast swallow revealed no evidence of contrast extravasation (Fig. 1D). The patient was managed conservatively and discharged after 48 h. She underwent follow up esophagoscopy 6 months later revealing proximal esophageal rings and intramucosal eosinophilic infiltration consistent with EoE.

A 22-year-old Caucasian male with a history of Crohn’s disease presented with vomiting, neck and chest pain and difficulty swallowing without food impaction. He was found to have pneumopericardium and pneumomediastinum with air tracking to the soft tissues of the neck on CT scan. He underwent contrast swallow without any evidence of extravasation. He was managed conservatively. He returned 2 months later with chest pain for 2 days and was found to have recurrent pneumomediastinum. Repeat water-soluble contrast study failed to reveal any contrast extravasation. Esophagoscopy was performed revealing a ringed esophagus secondary to EoE. 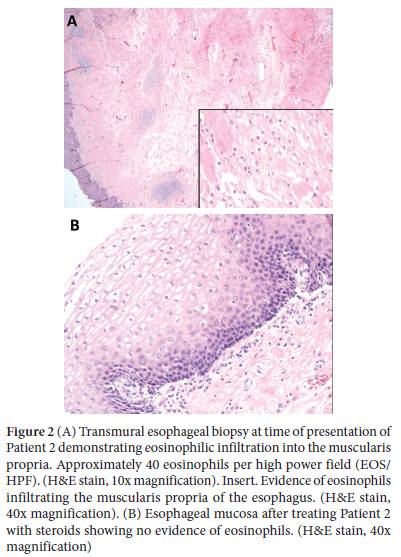 Riou et al [10] in 1996 described a case of esophageal rupture in the setting of food impaction and retching. The resected specimen showed marked eosinophilic infiltration involving the full thickness of the esophageal wall similar to Patient 2. Endosonographic evaluation of esophageal wall has revealed thickening of all wall layers in untreated patients with active EoE compared with healthy individuals [17]. After treatment with 50 weeks of low dose topical corticosteroid, increased epithelial thickness was still detectable, with only the mucosal layer showing a significant improvement [17]. Additionally, Fontillón et al [18] describe a case of esophageal rupture after food impaction that required esophagectomy. Resected specimen demonstrated eosinophilic infiltration throughout the esophageal wall, including muscularis mucosa, submucosa, muscularis propria and even reaching parasympathetic ganglion cells of the myenteric plexus. The rare availability of a full thickness esophageal resection specimen and the presence of transmural eosinophilic infiltration suggest that EoE is a transmural disease in some patients predisposing them to esophageal compromise. In the future, these observations may have important impacts on our current treatment of this condition with topical agents.

It is difficult to propose a management algorithm based upon limited retrospective clinical observation; however, certain points can be supported. Firstly, the triad of vomiting, severe chest pain and pneumomediastinum seem to be a consistent clinical presentation. Secondly, a water-soluble contrast examination may identify patients that can be managed conservatively. Thirdly, those patients with extensive contrast extravasation (Fig. 1B) will require surgery. Simple closure as seen in Patient 1 and Patient 2 (first episode) may not be successful and result in prolonged drainage. This may be a result of the impaired integrity of the esophageal wall due to transmural eosinophilic infiltration. Fourthly, surgical anastomosis after treatment with corticosteroids allows good healing but, again, this experience is limited to a single patient.

In conclusion, this case series broadens the clinical spectrum of presentation and complications of EoE and extends the risk profile of the condition, allowing some observations on clinical management.

18. Fontillón M, Lucendo AJ. Transmural eosinophilic infiltration and fibrosis in a patient with non-traumatic Boerhaave’s syndrome due to eosinophilic esophagitis. Am J Gastroenterol 2012;107:1762.