Cholangitis in a patient with hepatic hydatidosis

Hydatid disease is highly endemic and mainly occurs in the regions of livestock husbandry, including central Europe, North America, Russia, northwestern Canada, and western China [1] . The larvae can penetrate the intestinal mucosa, subsequently flow into portal circulation and settle on the liver, and finally evolve into hepatic hydatidosis [1]. Two rare cases recently published in the Annals of Gastroenterology demonstrated that cholangitis was secondary to liver hydatid disease due to intrabiliary rupture of hydatid cysts or compression of bile ducts by cysts [2,3]. Herein, we report another case presenting with cholangitis associated with hepatic hydatidosis.

In conclusion, it should not be neglected that cholangitis could be secondary to hepatic hydatidosis, especially in patients who lived in regions of livestock husbandry. 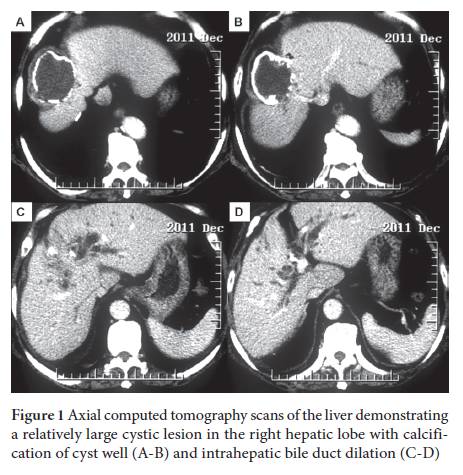