Hypercalcemic crisis due to adult T cell leukemia:
a rare cause of paralytic ileus

Adult T cell leukemia- lymphoma is a rare aggressive malignancy of the peripheral T lymphocytes, caused by human T cell lymphotropic virus -1 (HTLV-1) infection. Hypercalcemia occurs in about 70% of patients with acute adult T cell leukemia. However, there are very few case reports of adult T cell leukemia presenting as a hypercalcemic crisis. We report a case of a 54-year-old male who presented with abdominal pain, constipation and altered sensorium. On examination he had generalized lymphadenopathy, hepatosplenomegaly and paralytic ileus. Investigation revealed hypercalcemic crisis with low parathormone (PTH) levels. Peripheral smear and bone marrow aspirate were consistent with adult T cell leukemia. HTLV-1 serology was positive. Despite the corrective measures for hypercalcemia and chemotherapy, he succumbed to the illness in a week.

Human T cell lymphotropic virus (HTLV) -1 is a human retrovirus first isolated by Poiesz  et al in 1977 [1]. The prevalence of this infection varies widely from 10% in countries like Japan and the Caribbean islands to <0.01% in regions like Europe and North America [2]. In India the prevalence is 0.18% [3]. Hirata et al (1992) reported that the commonest route of transmission is breast feeding (16–30%) [4]. However transfusion of infected peripheral blood mononuclear cells in whole blood is the most efficient route of transmission. Other routes include injected drug abuse and unprotected sexual intercourse [2]. Chronic HTLV-1 infection is proven to cause Adult T cell Leukemia – lymphoma (ATLL).

ATLL is a rare aggressive malignancy of the peripheral T lymphocytes. Nuclear factor-κB activation by the HTLV protein Tax is found to be an important factor for tumorigenesis. Interferon-γ with its angiostatic effects plays a role in the regulation of ATLL [5]. ATLL occurs predominantly in the adults and is 1.5 times more common in males. WHO Classification (2008) describes four distinct variants of ATLL: acute, lymphomatous, chronic and smouldering [6], with a prevalence of 60%, 20%, 15% and 5% respectively [7]. The acute form is characterized by skin lesions (papulonodular lesions, erythroderma), lymphadenopathy, hepatosplenomegaly and elevated lactate dehydrogenase (LDH). Although hypercalcemia occurs in 70% of patients [8], hypercalcemic crisis is extremely rare. We report a case of ATLL presenting with paralytic ileus due to hypercalcemic crisis.

A 54-year-old diabetic male presented with diffuse abdominal pain, distension and obstipation for 3 days following an alcoholic binge. The patient had severe anorexia and nausea. The patient had become irritable with incomprehensible speech and abnormal behavior over the last two days and his relatives reported an 8 kg decrease in his body weight over the past 2 months. Six years ago he had undergone patellectomy and was transfused with 6 units of whole blood. There was no family history of malignancy. On examination he was dehydrated, tachypneic and cyanosed with a heart rate of 116 bpm and a blood pressure of 200/110 mmHg. His face and trunk were erythematous. He had generalized lymphadenopathy. Abdominal examination revealed hepatosplenomegaly, generalized tympanitic resonance and absent bowel sounds. Auscultation of the chest revealed diffuse crepitations. Neurological examination showed no signs of meningeal irritation. Cardiac examination was unremarkable. The clinical findings were suggestive of paralytic ileus and the differential diagnosis considered included acute pancreatitis, diabetic ketoacidosis (DKA), porphyria and hypercalcemia. 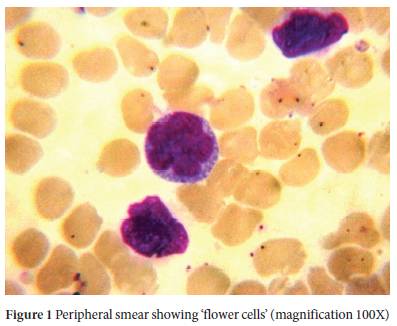 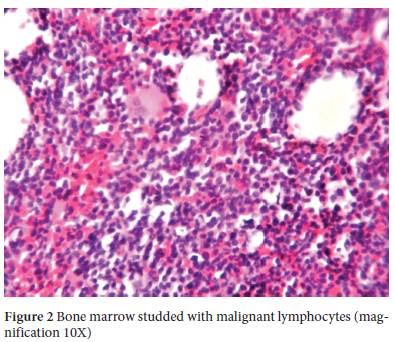 The patient was diagnosed with paralytic ileus secondary to hypercalcemic crisis due to adult T cell leukemia caused by HTLV-1. The patient was treated with aggressive hydration, corticosteroids, furosemide, hemodialysis and chemotherapy was initiated. His calcium levels reduced to 12 g/dL and his bowel sounds reappeared. However his leukocyte count increased to 345 x 109 /L. The patient developed anuria with progressive worsening of renal function (creatinine of 6.4 g/dL) and succumbed one week after admission.

Acute ATLL is a rare aggressive malignancy of post thymic lymphocytes aetiologically linked to HTLV-1. In this case, the patient is likely to have acquired the infection from a blood transfusion in the past. Though hypercalcemia occurs in 70% cases, hypercalcemic crisis is extremely rare [9]. Hypercalcemic crisis is characterized by serum calcium >14 mg/dL, oliguria, altered mentation and can cause paralytic ileus. After extensive literature search, we could find no reports of ATLL presenting with paralytic ileus.

Several mechanisms have been proposed for hypercalcemia in ATLL, the most prominent being Interleukin 1 (IL-1), Transforming growth factor β (TGF-β) and parathormone-related protein (PTHrP). PTHrP, overexpressed in ATL cells, causes bone resorption by osteoclast stimulation. Tax phosphoprotein of HTLV-1 upregulates PTHrP gene expression in vitro and transactivates the PTHrP promoter [10]. However PTHrP is not always the major mediator. ATLL cells induce the differentiation of the hematopoietic precursor cells to osteoclasts through the RANK ligand expressed on their surface and cause hypercalcemia [11]. The aggressive ATLL has a poor prognosis because of the multidrug resistance of malignant cells, large tumor burden, multiorgan failure, hypercalcemia and infections. The median survival is <1 year.

Strongyloidiasis is found to be associated with ATLL. The altered cytokine milieu may predispose to strongyloidiasis. On the other hand a strongyloides antigen may result in the development of ATLL due to the potent polyclonal T cell mitogenic response and reactivation of HTLV-1 expression [12]. Hence a search for strongyloidiasis is warranted in all cases of ATLL.

In conclusion, hypercalcemic crisis is a rare but potentially fatal complication of ATLL. It can present with paralytic ileus. The prognosis is poor despite aggressive treatment.